Whoa! It’s been over a month since I last blogged, but I assure you that I have not abandoned you! So much has happened in the last 4 weeks, and I spent days debating what events I should highlight. I’ll start by telling you about my most anticipated event thusfar in Korea, Ultra Music Festival, which came as fast as it went.

Ultra Music Festival is a worldwide electronic music event that is held in different destinations all over the globe including: South Africa, Buenos Aires, Miami, Europe, Japan, Ibiza, Chile, Brazil, and more recently South Korea. The closest one to me while I was living in the states was UMF Miami, but I never made it because ticket prices were always ridiculous before even adding in the costs of accommodations and travel to get there.

So when I found out that the ticket prices for Ultra in Korea were less than half of what they would be back home, I had no reservations about booking the 2-day pass for 190,000 KRW (~$170 USD). I even convinced my brother and wife to come with me since they were here on the last weekend of their honeymoon. I have only been to one other music festival prior to this, so I wasn’t really sure what to expect.

First off, my friends aren’t here. Secondly, I wasn’t so sure how much fun my newly wed brother and his wife would be at a crazy event like this. Lastly, I wasn’t sure how Koreans party. Not to mention…there’s been the MERS (Middle East Respiratory Syndrome) virus paranoia here in Korea which definitely put a damper on things. There were even a good number of people who requested for a ticket refund, because of the MERS outbreak. Despite everyone’s growing concern over MERS, I was determined to have a good time no matter what and that I did!

11 THINGS TO KNOW ABOUT ULTRA MUSIC FESTIVAL IN KOREA:

1. Location: Main stadium of Jamsil Sports Complex in Seoul. Get off at the subway stop, Sports Complex. From there, it’s only a brisk walk to the entrance of the arena. Taxi rides to and from here aren’t too badly priced either. However, there are no camping sites, beaches, or near-by nightclubs here. You have to go out of your way either by taxi or your own car to get to an after party…and good luck waving down a cab driver if you stay all the way until the end of the last DJ’s set. We got back to our hotel around 12:20am but it took more than 30 minutes for us to flag down a taxi driver. 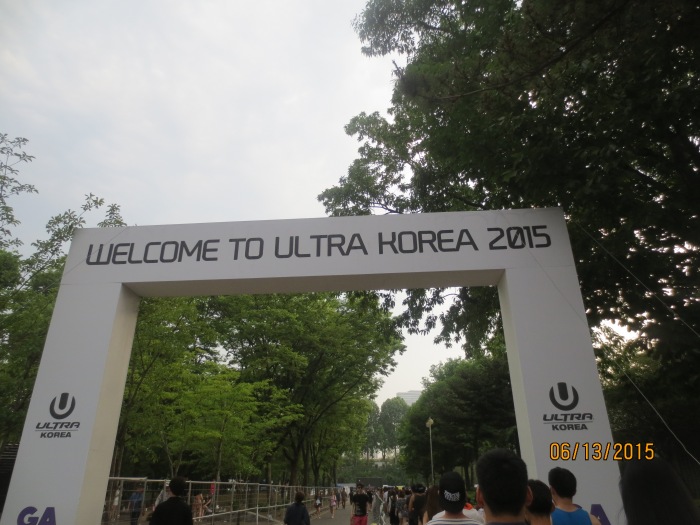 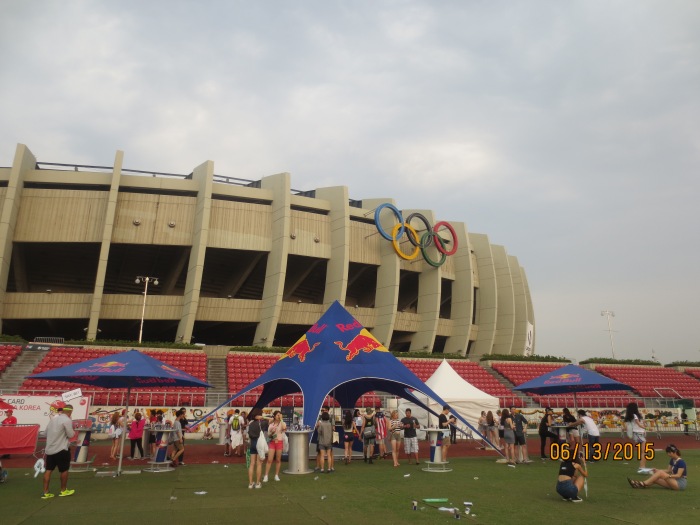 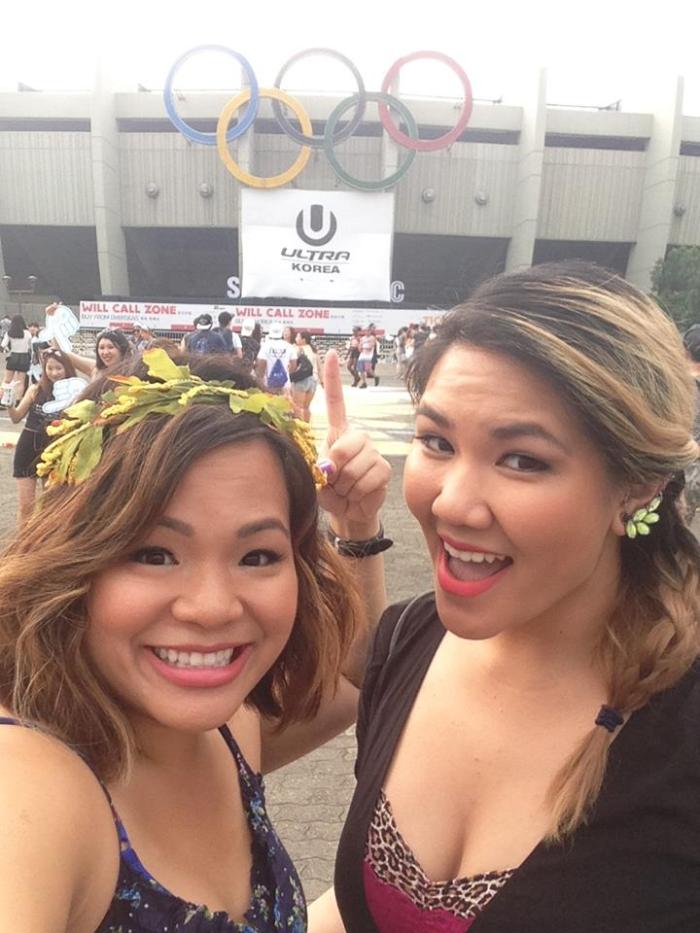 2. Security Check: This was the first event I’ve ever been to where they check out temperature and pupils at the door to see if you are on some other shit. I wasn’t sure if they were doing this just as a precaution because of MERS or if they do this every year, but it was weird. My brother, who’s a nurse, did mention that even though they had the pupil checker, they weren’t using it correctly so it really didn’t matter anyway. But if you are on something else, it would surely make you feel rather nervous going through the line at the door. All alcoholic beverages must also be left before entering the venue, but that’s a no brainer. I ran into one guy who still managed to fill his water backpack with soju, so maybe they weren’t that thorough checking people’s bags.

3. Cameras: I walked in with a small, compact digital camera on the first night and they would not let me through at baggage check. This made no sense to me, considering the fact that it was written on UMF Korea’s official website that DSLR cameras are prohibited, but small compact cameras are allowed. I was pissed when they made me check in my camera the first night, but I just stuffed my camera into the front part of my waistline the second night to avoid paying and waiting in line for “lockers.”

4. Lockers: They made me check my camera into a “locker,” the first night. I put lockers in quotation marks because they weren’t really lockers at all. You just bring your stuff up the locker zone, and they give you a mid-sized drawstring plastic bag to put your belongings in and then place a sticker on it with the last 4 digits of your phone number. Then, they give you a sticker to place on your wrist band to redeem your bag from one of the shelves at the end of the night. I ended up having to rent out a locker for 5,000 KRW (~$4.50 USD) just for my small camera, gum, and hand sanitizer. Luckily the lockers are decently priced, so if you have a jacket or coat that you would like to bring, it definitely is worth checking in. I strongly advise against bringing anything valuable to this type of event. If you have anything of value, especially money or electronic equipment, make sure that it is on your body at all times or just keep it at home to be safe.

5. Bag Check: I did not carry any bags, purses, or backpacks with me to this event and it was actually very nice to have nothing on me while dancing the night away. However, if you do plan on bringing a backpack or purse, they give it a quick glance but don’t actually ask you to empty out the contents of the bag. My friend was able to bring in her GoPRO camera only because it was at the bottom of her drawstring backpack. It’s strange that they won’t let you bring in gum or hand sanitizer, but if you have a backpack full of shit…they barely search you. Odd isn’t it?

6. Buying Alcohol: If you plan on buying anything at this event, you have to have a T-money card to load money onto before you make purchases. Alcohol at this event was VERY reasonably priced. Most events like this usually jack up the price of drinks, but here most drinks were around 5,000 KRW (~$4.50 USD).

7. Water: They DO NOT serve water at UMF KOREA. WTF!!! My brother asked to buy water from the various “Drinking Zone” locations, and they simply said that they do not sell water. I found this beyond baffling. How do you NOT have water available when people are dancing their asses off, sweating, and in a crowded place? Luckily for us, one of the girls we came with knew a guy working the event who gave us a few bottles to keep us alive.

8. Food: As I was walking into the venue, I got whiffs of fried food and kimchi. I didn’t eat at the event, but I’m sure that they had a strange variety of foods to choose from. On the second night, I looked down at my leg that had been hit with some type of red sauce. At first, I thought I was bleeding….then I realized, it was just kimchi sauce of some sort. Thank god, but even that shit irritated my skin. I imagine that eating that type of spicy food, drinking, and raging…may not be such a great combination. On any other day….but not at these type of things unless your stomach can handle it!

9. The crowd: As expected, the majority of the crowd was made up of Koreans. We are in Korea afterall! However, there were also a good number of foreigners who attended. American military were all over the place, and they travel in obvious packs. I didn’t spot any other English teachers I knew, but I’m sure there had to be some. Although there was some diversity in the crowd, it wasn’t as much as I would have liked. You wouldn’t see various flags from all over the world waved in the air here by festival go-ers from near and far. Instead, they had the Korean staff of the event carrying international flags through the crowd to falsely advertise just how “international” the event really is. The majority of the crowd barely lifted an arm or leg to groove to the music and when I paid too much attention to it, it killed my vibe. While the majority was just standing still, I was prancing and fist-pumping my way through the crowd trying to get closer to the stage to see my favorite DJ throw down his latest beats. I really wish they were as hype as I felt, but the energy from the crowd was almost non-existent the first night. Luckily, it picked up a little more the 2nd day.

The Live Stage in the day (Hip Hop/Rap Stage) 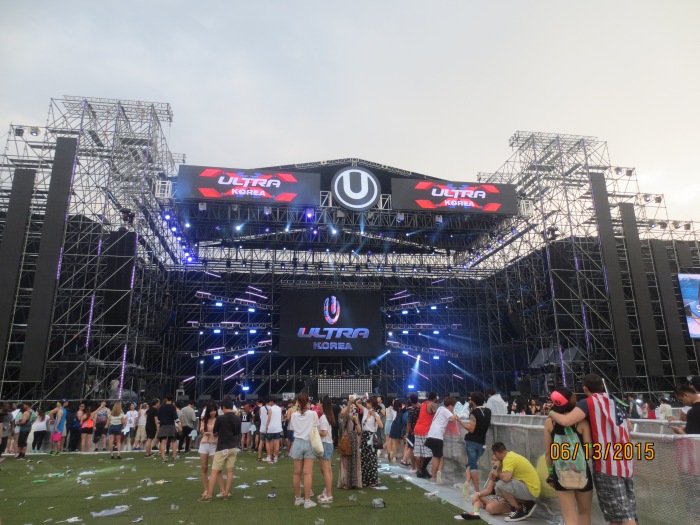 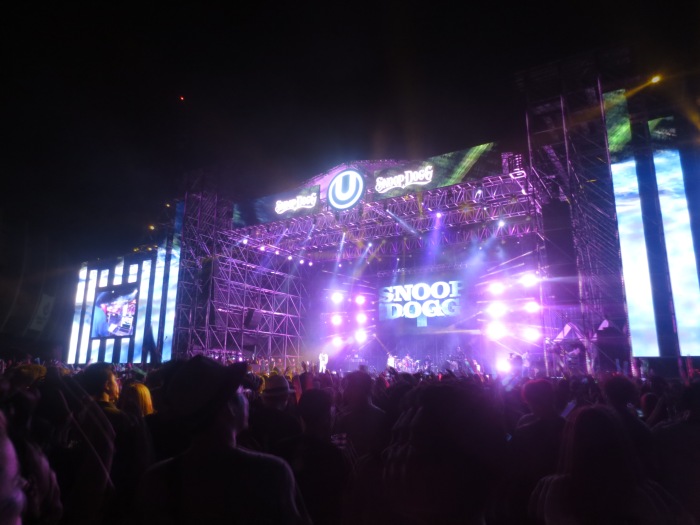 The Main Stage in the day time 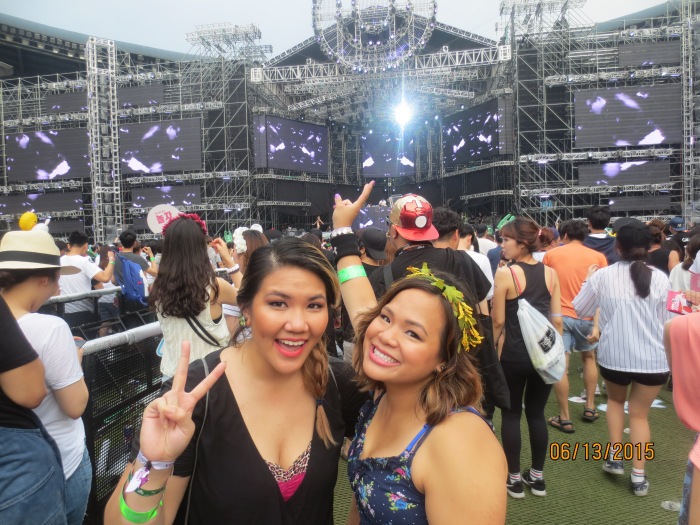 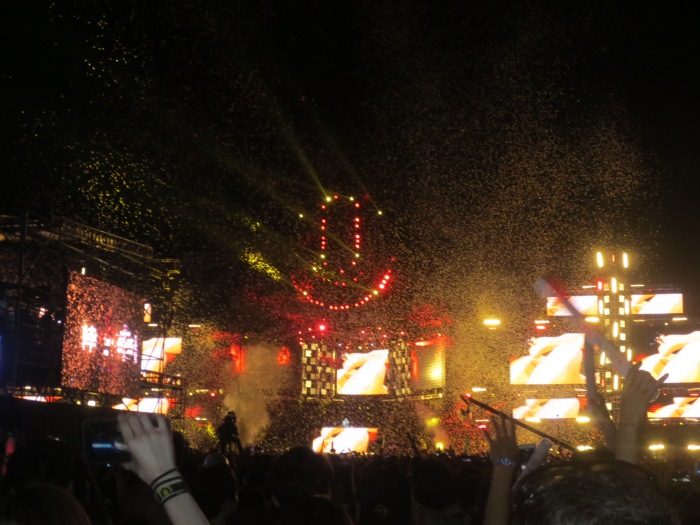 10. The music: Skrillex, Hardwell, Lil’ Jon, Snoop Dogg, and David Guetta were among many of the top headliners for the show. They were worth every penny. I even got a first listen to some Korean rap and hip-hop artists that I had never heard before. I danced until every inch of me was drenched in sweat and I loved every bit of it. If you love music and you love a good time, you’ll have the ultimate time at Ultra!

WHAAAAAAAAAT!!! YEAAAAAAAAH! Even I was surprised to see Lil’ Jon @ UMF! 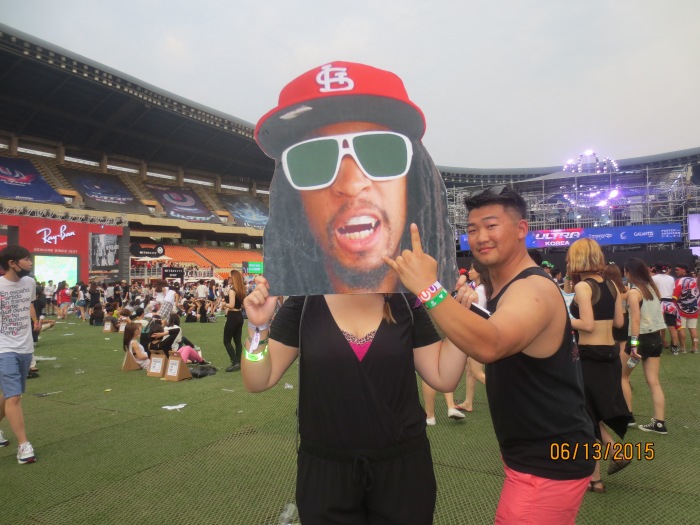 The Motherfuckin’ Pimp Himself: SNOOP DOGG 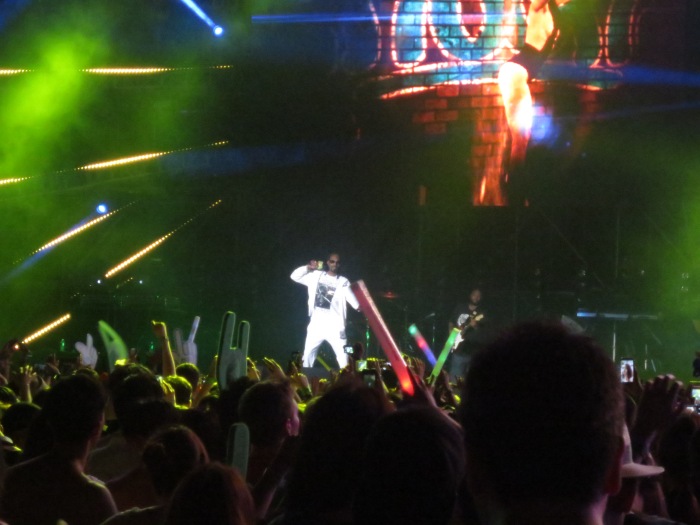 11. After parties: Ultra ends around 12 midnight, which is still early for most festival go-ers. With the UMF wristband, you can hit up clubs after the event with no cover charge. We were able to get into clubs in Itaewon and Gangnam without paying. Just flash your wrist band and let them know you came to party!

Free Admission into one of the best Hip Hop clubs I have ever been to: Boombar in Itaewon. 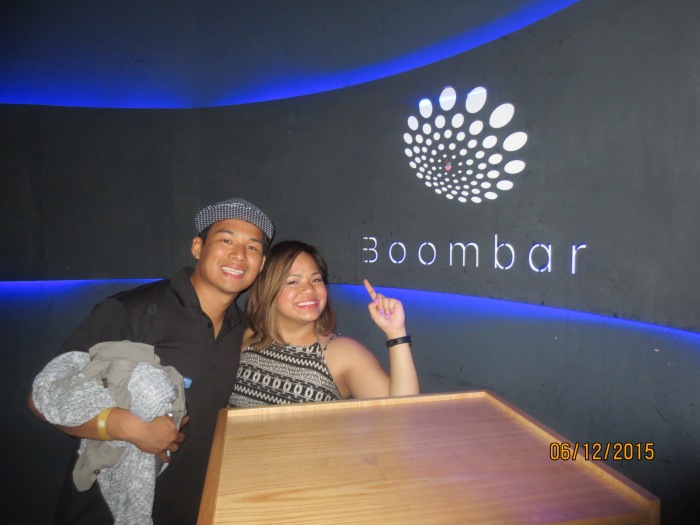 Thanks for the memories, Ultra. Next time I see you, it will be in another country! 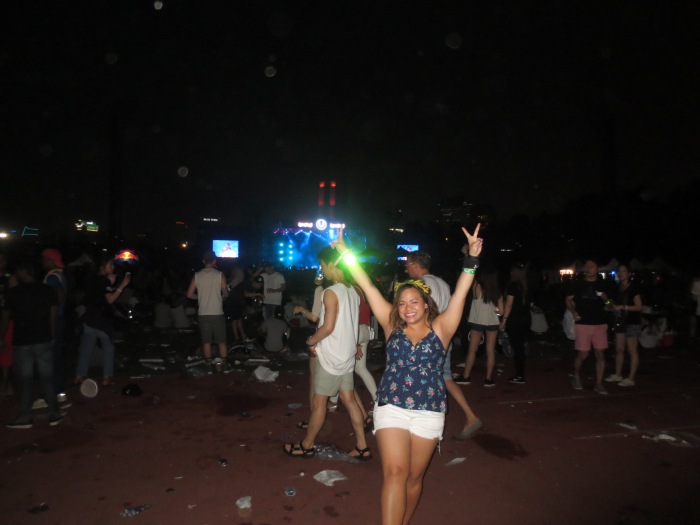 CHECK OUT my own official vlog aftermovie of UMF Korea 2015:

Wanna go next year? Here are the links: